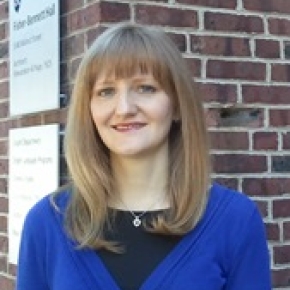 What Ms. Gonzalez does: She teaches a variety of elective and core skills courses in the Intensive Program in addition to special programs, including the Business Intensive Program and the International Business Communications for Professionals program. She has served as a program coordinator for a custom offering of the Institute for Academic Studies and has taught several courses in this program as well. Rachel also serves as a rater for the SPEAK Test and the Interactive Performance Test for International Teaching Assistants and conducts Oral Proficiency Interviews for incoming J-1 scholars at Penn.

Experience: Her teaching career began in 2006 in the New Jersey public schools where she worked as a high school English Literature teacher and later as an ESL teacher. In addition to her experience in the New Jersey public schools, she also served as an Adjunct Professor of ESL at Atlantic Cape Community College in Atlantic City, NJ and as an ESL Instructor for the Intensive English Language Program and the Access Temple Program at Temple University in Philadelphia, PA. She joined the English Language Programs at Penn as a lecturer in 2013 and became a Language Specialist in 2014.

Travels: She has travelled extensively throughout North America and Europe. Most recently, she spent six weeks in France and Spain in 2015.