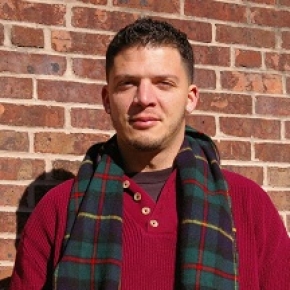 What Mr. Benjamin does: He has been a language teacher since 2003 and has taught English since 2009. He began teaching in the English Language Program at Penn in 2013.

Experience: He has taught high school Spanish for four years after graduating with his Bachelor’s degree from Millersville University in Lancaster, Pennsylvania. He volunteered several times as an English tutor in Guatemala during the summers. After his time in secondary education, he moved on to higher education as a student instructor while working on his Master’s degree in TESL at West Chester University. He taught high school at a charter in Lancaster City before settling on teaching at the college level at Drexel University. He joined the ELP in 2013 and has taught a wide variety of courses in the program.

Travels: He has spent significant time in Mexico and Guatemala for various projects, occasionally serving as an English teacher. He’s been on extended trips to Turkey where, among other things, he studied Turkish and informally tutored English. He’s also travelled through France, Spain, Canada, and Jamaica, and he has had short stays in Germany and El Salvador.